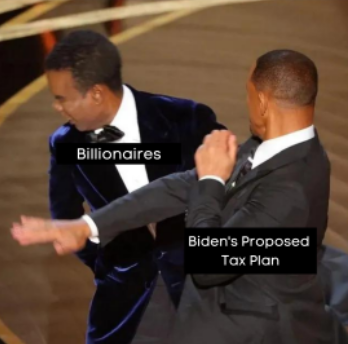 While Will Smith was gearing up for the bitch slap heard around the world, Joe Biden was busy preparing a bitch slap of his own...for the ultra-rich. 👋💰 The president's Billionaire Minimum Income Tax is getting more mixed reviews than your favorite restaurant on Yelp. 💁 The proposed tax would include unrealized gains, which are assets that haven't been converted to cash (think growth in stocks, bonds, and ETFs). Billionaires accrue insane amounts of generational wealth this way, since the IRS only counts gains if they've been sold. Similar plans failed in the past once they hit Congress, but trust fund babies everywhere are keeping their eyes on this one.👀👶

1. 🙋💸Who wants to be a billionaire? The plan would affect US households worth more than $100 million and require them to pay at least 20% in tax on their income.

2. 👛💲Pay up. If you're already paying at least 20% in income tax, don't sweat it. If you pay less, expect to play catch up to meet the threshold.

3. 📝What's the plan? The goal is to raise the most amount of money from the least amount of people as possible. According to the White House, the plan would affect around 20,000 households, but bring in $360 billion in revenue over the next 10 years.

4. 👹Rich people suck! Supporters of the bill love it, feeling it will level the playing field and force billionaires to pay a similar percentage of wealth as America's middle class.

5. 🙅No way, José. Those who oppose say that the plan is unfair due to the tax on unrealized gains. It will also be difficult to implement and this type of wealth tax may be unconstitutional.

🔥Bottom line: This bill packs a punch and is generating strong opinions from both sides of the aisle. The country's massive wealth inequality and budget deficits have the powers that be looking for a quick fix. The jury's still out on whether or not this is the solution.

What are your thoughts on this bill? Let us know by connecting with us on Social Media and be sure to share this newsletter with any friends & coworkers!